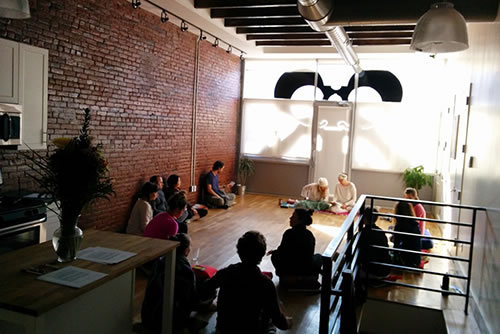 Inspired by Coboat: From the Bay of Bengal to rural Austria

The Coboat Delivery crossing from the Maldives to Thailand wasn’t quite plain sailing. I envisaged Heinz Grünwald, Uwe Allgäuer, Matthias Zeitler and their six other companions spending much of the 17 days and nights exploring ideas, chilling on the yacht’s nets with a few coldies. Not so.

There were ‘all hands on deck’ moments, storms, night watches, fatigue, break-downs and stuff-ups. There were also shooting stars and triple rainbows, dance parties, spaghetti, lots of sharing, business development and interventions.

And the venture Heinz, Uwe and Matthias are now building, Coliving.at, came to life on Coboat during this voyage. Listening to them recount their experience had me grinning from ear to ear.

Heinz originally thought of the idea two years ago. He envisaged a community living and working in a castle outside Vienna. He wanted to bring together entrepreneurs and freelancers in a coliving, coworking space, in a remote location free of distractions. The idea was to be inspired, and to grow start-ups with the support of a community. And live in a castle!

After two years Heinz’s idea hadn’t left the starting blocks. During the crossing, Coboat’s cofounder Karsten Knorr, coached and mentored Heinz on his castle vision, identifying reasons why in its current form it wasn’t viable. But when you are surrounded by creative, adventurous minds this insight was far from a showstopper.

Uwe and Matthias were totally sold listening to Heinz talk about this castle idea set in rural Austria. This was the lifestyle they all aspired to live but couldn’t find any such opportunity close by. So when your lifestyle doesn’t come to you – you build it.

Uwe and Mattias joined forces with Heinz to adapt the idea and make it more financially viable, exploring various different business models. In fact, Matthias (already location independent and an entrepreneur) wouldn’t let the idea go even after the sailing trip, and kept encouraging Heinz to pursue it. That was when they decided to initiate the Coliving.at project and reach out to like minded people who could help lift it off the ground. “They gave me passion and inspiration,” Heinz explained about his companions.

So, what made them go for it? When I asked this question they looked at each and said “Coboat inspired us.”

Heinz was at Kohub, the coworking space on Koh Lanta Thailand, in March 2015 when the Coboat idea was first conceived. And then in late summer he saw it become a reality. It proved to all of them that an ambitious, seemingly impossible idea, could be made possible. Their time on the boat also proved that it was not just possible, but inspiring to bring digital nomads together in one place, coliving and coworking.

And that began their land-based partnership. Since the crossing they have continued to grow their concept, searching for the right property, building their website and growing their community.

I asked them if this would become their ‘new full time jobs’. “This is a fun project for all of us. So our approach was not, “what business should we be in?” but rather “how can we create our dream living environment?” We are all working on other ventures to earn a living” they told me.

Uwe had a long corporate career prior to his semi-retiring to manage real estate investments and enjoy life. Heinz is a cofounder at slopestars.cc, a startup that enables online ski ticket sales, and is responsible for the business development and sales. The main focus for Matthias has been the development of OpenStrom, an Open Hardware Smart Meter device that can measure and control power circuits over the internet.

Today, (the day of my interview with them), marked a huge milestone in the realisation of their dream lifestyle. Matthias found a property. Not just any property – they found THE ONE. The building produces its own power, it is close to the forest, it has 20 rooms, the attic is a great coworking space AND there is a river running through the grounds (suitable for a mini Coboat maybe?). Their excitement is tangible. “It is really amazing.”

“When we have 10 people to move in we can launch. So we could be looking at taking this live within a few weeks!” said Uwe.

Coliving.at is one of a kind in Austria. Its members will be making history and leading the shift away from traditional corporate work environments. The combination of coliving and coworking, where collaborations between location independent entrepreneurs and innovators fuel startups doesn’t exist in Austria. “We believe Austria is the perfect place to introduce this new working trend”.

Austria has a favourable grant/subsidy system for startups and a good business environment for freelancers who want to work with local companies. It is a place with a high quality of life and there are a lot of German speaking nomads who look for a base with like minded people where they can live when not travelling.

The business model that makes all this viable? “Coliving.at will run as a cooperative and not as a corporation” they told me. The community is made up of members, not customers. Members will be part owners, all helping out to support and fuel the community and space. The goal is to get 15 people. The team recognise that starting a business is hard and they want to make it a little bit easier by reducing members’ monthly burn rate.

Their lasting comments widened my grin even further. Matthias half joked that when faced with rough seas they became very good friends. Some testing times meant they all had to pull together and this made for a strong foundation to their friendship. Uwe will always remember the spirit of the people coming together. With a big smile he said, “It was a very worthwhile experience.”

Congratulations guys, on making your idea come to life. The Coboat team and I are so excited for you and really rooting for you all. You have inspired me and I imagine many more to come. Thank you!

So this is the first ‘Made on Coboat’ story. It is the exact reason for Coboat’s existence.